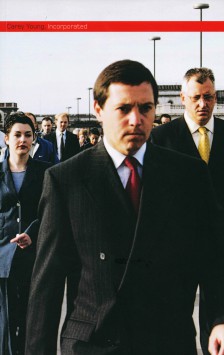 The first publication devoted to the work of Carey Young, an artist whose work provocatively and playfully questions familiar notions of art as a mode of resistance and critique in a world of dissolving boundaries, in which the borders between politics, culture and business seem to have disappeared.

Having worked within business for several years, Young presents the role of the artist potentially to be that of an infiltrator within the inner world of the multinational, adopting its language, codes and tools, as well as its tactics of disappearance, in order to offer an insider’s perspective on to the formation and control of mass culture.

Features essays by Alex Farquharson, John Kelsey and Jeremy Millar, a collaborative text by Carey Young and Liam Gillick and an introduction by Steven Bode.

£9.95
Buy now
(Your order will be fulfilled by NBN International)