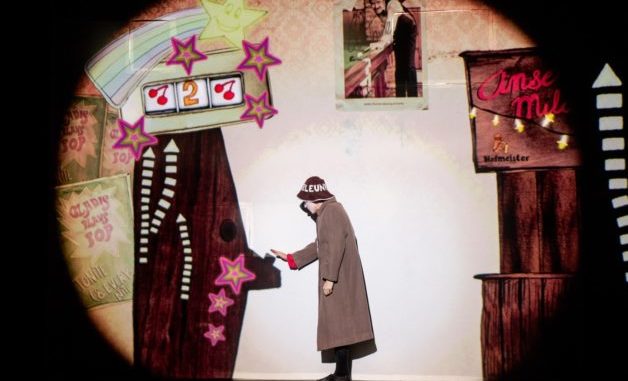 Ever wondered how traditional cultural stories may have seeped into your bones and actually informed your life?

The festive season is often a time for re-enacting or re-visiting folk tales, cultural stories and traditions. So how about coming to see our Roots show here at HOME, Manchester? Created by the 1927 production team (Golem, The Animals and Children Took to the Streets), this world premiere blends the three strands of theatre, animation and storytelling to give us a glimpse into the narratives of our forefathers. Running now until Mon 30 December, it’s a family show for all to enjoy. See for yourself the delights on offer in this trailer.

Picking up on this folk tale and storytelling theme, we wondered if you would like to find out more about some of the books and DVDs that we promote and sell that can be seen to cluster around this varied and incredibly interesting topic. It’s one that probably touches us all.

Back in 2007, for Documenta 12, well-known Chinese artist, architect, curator and filmmaker Ai Weiwei made a big splash when he invited 1001 Chinese citizens to Germany to experience their own 28-day long fairytale. This film Ai Weiwei: Fairytale DVD documents it all, from the first off preparations, the different project challenges, to the participants’ journeys to Europe and it covers the artist’s own thinking behind the idea.

And if you want to delve even deeper into this Fairytale project by reading detailed documentation and commentaries about it, then this extensive Reader (Ai Weiwei: Fairytale: A Reader) is one to explore at the same time. These two items really compliment each other. They also beg the question – what would our own fairytales be? And can we ever achieve them?

Traditional stories can often be told through traditional objects, so take a look at this title from publisher Walther Koenig: African Ceramics: A Different Perspective explains the form, function, decor and materiality of pottery production in Africa, from the 19th to 21st century.

In this next title (Alison Erika Forde: The Tallest of Tales) artist Alison Erika Forde showcases 12 of her works that take inspiration from the traditional fairytale. At first look they are seemingly innocent and enchanting, yet look a bit further and they can become quite dark and disturbing, or at least they appear not exactly what they first seem. Influenced by folk art, and using mass produced pictures and charity shop finds, the artist also draws on her dreams and imagination to create her striking images.

Lots of Company: John Holden is based on a supernatural folk story that was originally written by Victorian writer and folklorist Marie Clothilde Balfour. Using image, typography and design and by transcribing the original Victorian English dialect alongside traditional Chinese calligraphic characters, the story is hypnotically retold by the artist.

Braids: Memories of the Narratocene is one of the most recent titles in publisher Dis Voir’s Illustrated Tales for Adults Series. It’s a novel based on the work of scientist Herve Le Guyader telling about a new chapter in the history of Earth after an apocalyptic climate change catastrophe means that humans disappear. In the transitional period it turns out that stories – the narratocene – are at the heart of our experience of the world as homo sapiens.

Leiko Ikemura:….and all of a sudden the wind is turning: Using her stance of distance and feeling like a stranger in between cultures – of feeling at home everywhere and nowhere – Japanese artist Leiko Ikemura brings her wide experience of different cultural traditions to her paintings, but also strongly roots her workd in her Japanese heritage, all at the same time.

In The Inventors of Tradition II: Beca Lipscombe abd Lucy Mckenzie (Atelier E.B.) the two artists subjectively study the history and traditions of the Scottish textiles industry since the 1930s, and have responded with their own artworks. They look at Scotland’s recent cultural past, making new connections – bringing together art, architecture, design and sub-cultural identities.

Archives of Tony Oursler: Imponderable explores the collections and objects of artist Tony Oursler – his archive – with its many functions as a visual resource, historical inquiry and, really interestingly, his family history: a crucial self-story in all our lives.

Quite an old title from 2006, Local Stories explores the idea that stories are often the starting point for the most powerful contemporary art. It also reveals how personal or incidental stories can often reflect the broader sociopolitical picture.

Fairy Tale: Contemporary Art and Enchantment  concentrates on how the fairytale is ever evolving, and looks at contemporary artworks that revisit traditional tales, re-modelling them for our modern times. Included are two earlier versions of fairytales, to illustrate their evolution. Also included are artworks that conjure up the feelings and atmosphere of the fairytale.

Finally, on the book front, Jockum Nordström: For the Insects and the Hounds: Drawings, Collages and Sculptures 2014 – 2017  features the artist’s works that are inspired by folk tales, outsider art and music, showing that his imagination and creativity know no bounds as he creates other worlds using collage, graphite drawing and sculpture.

Alternatively, if a more theatrical way of telling and receiving stories is really what you prefer this festive season (and specifically for the younger people out there) then HOME Manchester and Little Angel Theatre are also showing the David Walliams’ book-inspired play, The Slightly Annoying Elephant. Recommended for 3-8 year olds, the hilarious story is brought to life through puppetry – a particularly enjoyable storytelling art form to experience at this time of year. The trailer for this can be viewed here.

Posted on 9th December 2019
Back to news