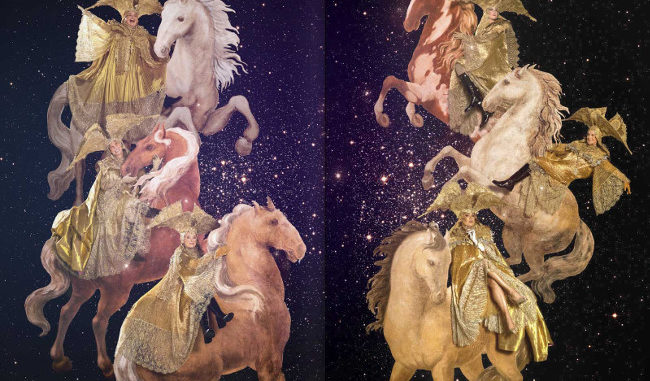 This year’s amazing spectacle Life Ball AIDS charity event will happen in Vienna on 8 June and will be the last ever Life Ball after 26 amazing years. According to the event organiser LIFE+, it is time to move on as ‘underlying conditions and circumstances have changed greatly over the last few years….AIDS has changed from a death sentence to being a chronic disease….the paradox for this success is that the number of allies for AIDS charity projects is decreasing.’

For its last ever theme, founder Gary Keszler has created the slogan ‘United in Diversity: Walking on the yellow brick road towards an end to AIDS’. The occasion will also mark the 50-year anniversary of Stonewall, and is being held as a gala event during Europride2019.

LIFE+ will still continue to do its work, standing against stigma and exclusion, encouraging people, governments and communities to think about HIV/AIDS and raise awareness. In the last 26 years is has raised over €30 million in donations for national and international AIDS charity projects.

Medical advances really have moved on in recent years regarding the treatment of HIV and AIDS with the use of new drugs called antiretrovirals (ART – antiretroviral therapy)  – found to fully suppress the risk of transferring the disease between same sex males as well as heterosexual partners, as found in previous studies. It’s only taken a few years for these very recent advances to create such positive change: In 2012 the first drug to be taken to prevent the contraction of HIV, pre-exposure prophylaxis (PrEP) was approved in the US. This was then trialed in Scotland in 2017, and trials are still ongoing in England. The end of HIV/AIDS might now really be in sight. The message needs to be shouted loudly, as supported by the U=U campaign. So to help raise people’s awareness on this new positive treatment,  we thought we’d contrast and take a (sometimes retrospective) look, to highlight some HIV/AIDS-relevant books that we still have on our list. Hopefully re-iterating the usefulness of art as activism, or just illustrating how far things have come along with treatment and prevention.

If the way that viruses such as HIV transmit disease is something of interest then take a look at John Walter: Capsid, which was published alongside our very own HOME exhibition here in Manchester in 2018/19. It asks the question, is culture transmitted in much the same way?

Last year’s Life Ball celebrated its 25th anniversary and had the theme of The Sound of Music. We have the related style bible here. It includes an amazing set of photographs taken at the original locations of the Hollywood film.

Artist AA Bronson was originally part of the artists’ collective, General Idea, set up with his friends Felix Partz and Jorge Zontal in Toronto in 1969. He helped nurse his co-artists through their AIDS-related illness, until they both died in 1994. The 2016 revised paperback edition offering an overview and retrospective of their work is still available in a small number, and well worth a read. Bronson continued working as a solo artist. In AA Bronson / Peter Hobbs: Queer Spirits  he continues to queer the cultural world. In five chapters of photographic images he documents his ritual meetings of 5 small groups of men, in Banff, New Orleans, Winnipeg, Manhattan and Fire Island.

The group Ultra-red was founded by two AIDS activists in 1994, and has since expanded to include researchers, organisers and artists from different social movements, including those involved in the politics of migration, racism and community as well as HIV/AIDS. They work within the realms of sound art and modern electronic music and this title, URXX Nos. 1-9: Nine Workbooks, 2010-2014 covers nine of their workbooks plus a DVD containing an archive for creating future research.

Derek Jarman died of AIDS-related illness. Derek Jarman: Evil Queen focuses on the artist’s last set of paintings, of which there were 17, and it accompanied an exhibition of the same name at Whitworth Art Gallery. Here filmmaker Jarman provided us with another of his creative threads and touched on how he confronted his own mortality, gave insight into his stance about his own HIV status, his sexuality and also explored how homophobia was rife in the media of the time, especially during the AIDS epidemic.

In the 1980s, following the end of Brazil’s dictatorship, José Leonilson (José Leonilson: Empty Man) came into his own. This catalogue features his drawings, paintings and embroderies that he made up until 1993, when he died of AIDS. From the mid 1980s up until his death, the artist was prolific, and he made many connections with his work, touching on the global issues that came to light during the AIDS crisis of this period.

Looking back at the international art activities around 1990, the authors of To expose, to show, to demonstrate, to inform, to offer look at artists’ activity around the climax of the AIDS crisis which happened at this time. The effects of spreading globalisation was being felt and there was heated debate on the social function of art, and how art related to its public.

It is sad to think how many people in the past, including so many artists that still had loads to give and share, have lost their lives to AIDS, but incredibly hopeful to hear that HIV and AIDS are now being overcome due to amazing medical breakthroughs. Spread the word!