THE BROOKS PRESS was founded in September 1898 by F. W. Brooks in Wirksworth, a small quarry town on the edge of the Peak District. It served the printing needs of the local community as well as publishing limited edition hand made books, influenced primarily by the private press movement.

The press launched with its first publication, a reprint of an important local text Wirksworth and Five Miles around by R.R. Hackett, and then went on to publish a series of other books, including the poem Christabel by Samuel Taylor Coleridge and a number of self improvement titles such as Ideas and Ideals and The Reality of Self.

By the mid 1970’s the need for a local printer was diminishing and so the press was closed by the founders grandson B. J Brooks, who was then forced to move into more mechanised forms of printing. B.J.B. died 20 years later and the press was mostly forgotten. 15 years on however, two Brooks Press books turned up at the door of his son, C. J. Brooks, initiating of a decade long journey back to the area of his birth to discover more about a business that he previously knew very little about, with no elder family members’ left to ask.

The result of that journey is the first book from The Brooks Press since the 1930’s and is the title that reimagines the press for the 21st Century – The Brooks Press of Wirksworth by Chris Brooks. 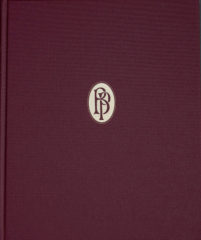